Past exhibition: THE SEE WALL
Exhibition

Past exhibition: THE SEE WALL 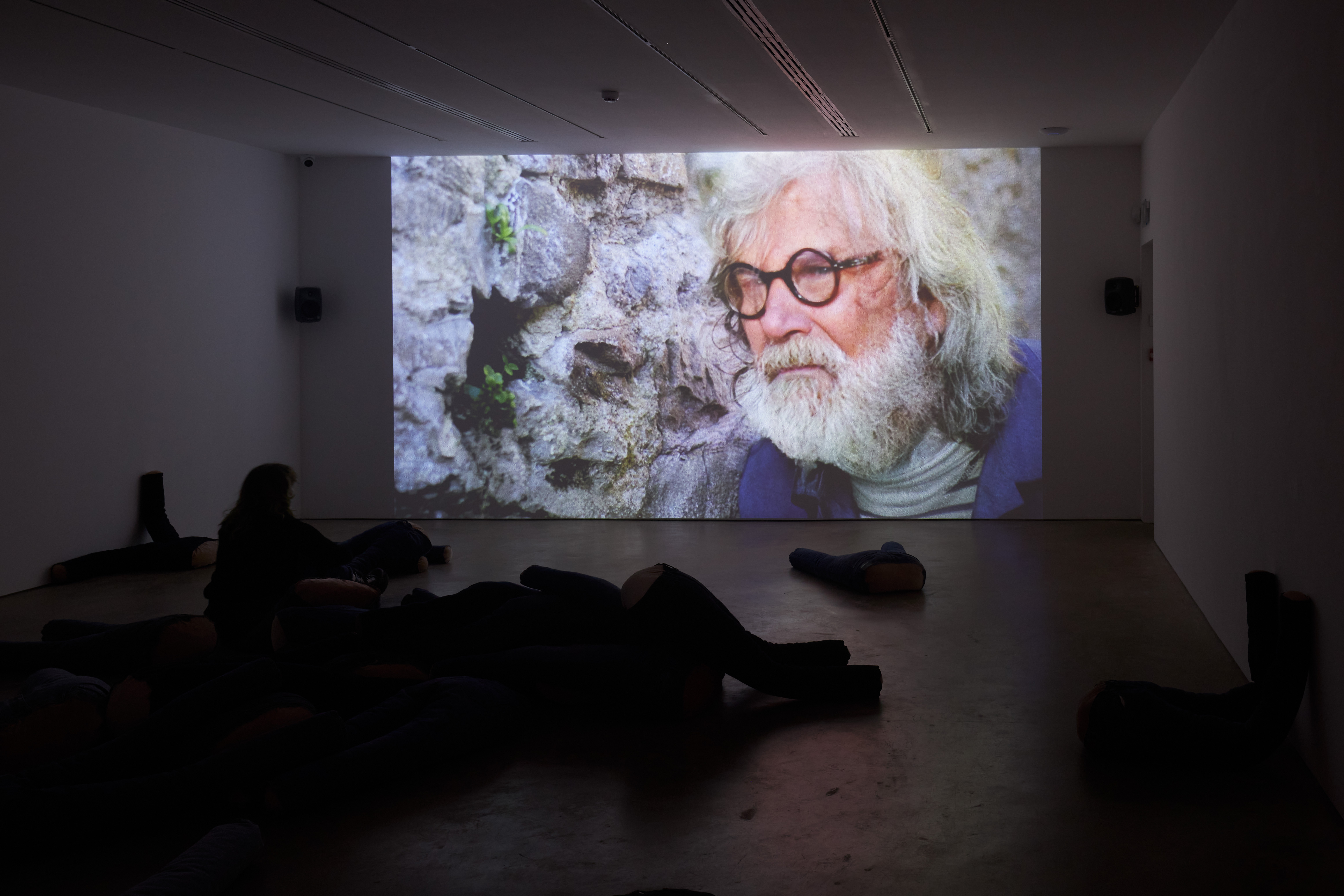 East Quay Gallery is delighted to present THE SEE WALL, a new solo exhibition by Welsh artist Bedwyr Williams. Displayed across both galleries, features film, painting, and installation, all exploring the life, compulsions and foibles of a fictional older artist, wryly delivered through Williams’ autobiographical lens. Set within the grey, stormy, seaside town of Watchet in winter, Bedwyr draws from his personal experience as an artist who grew up in a seaside town in North Wales.

The title of the exhibition, THE SEE WALL, reflects the main character’s unorthodox preoccupation with Watchet’s sea defences. As residents of Watchet know only too well, sea walls are symbols of resilience but they also need maintenance and care. They protect us; they keep us safe, but they are also symbols of erosion and decay. In late 2019, following a particularly stormy night, a large hole developed in the sea wall at the northern end of the quayside in Watchet. Witnessed by Williams on a visit to the town, the sea wall and its fallibility has become a metaphor for our artist. Just as the wall will eventually succumb to the sea, so he will succumb to his own mortality.

For this show, Williams has created an antihero whose fastidious obsession with his appearance embodies society’s fascination with self-preservation, ageing and mortality. The exhibition’s protagonist is a fusspot. He takes extreme care to ensure all his clothes and belongings age at an equal rate. His immaculate jeans and supple shoes are worn in such a way as to never develop holes, fray, or come apart at the seams. However, this artist harbours a secret. Despite his compulsion to take care of his clothes, he is obsessed with holes and rotten, decaying things.

Shown in Gallery 2 upstairs, Bedwyr’s film, Near Mint, 2022, (running time approx. 19 minutes), zeros in on this narrative of the older artist and his compulsions. Through our ageing, fictional artist, the exhibition speaks of time, not wanting to get old, and the ultimately futile measures we take to protect what is precious to us. Downstairs, in Gallery 1, the exhibition includes paintings inspired by the local landscape, but also nods to the fictional artist’s infatuations and fears.

In acknowledgement of the town’s community, the film features a chorus of proud residents, embedded in holes in the harbour wall. Bedwyr wanted locals to be included, and the film acts as an absurd ode to the town’s solidarity, togetherness, and resolve, in contrast to the vanity of our visiting artist. Near Mint closes with a Sea Shanty, a traditional folk song performed emphatically by David Milton, Watchet’s Town Crier (locally known as the Bell Man), which draws from the town’s strong coastal heritage, but also acts as a grounded foil to Bedwyr’s obsessive protagonist.

In the centre of the gallery, you are invited to lie down on a large mound of limp, second-hand, stuffed jeans. Grotesquely piled like cut-off legs, the installation is both playful and comically macabre, alluding to the character’s unhealthy preoccupation with worn denim.

Throughout, Bedwyr is lampooning himself, but also other artists. Struck by the down-to-earth people of Watchet and their humour, he creates a self-conscious visitor intimidated in the face of a strong community.

For the last two days of the exhibition you can watch NEAR MINT here!!

Bedwyr Williams lives and works in North Wales. Previously, he has presented solo exhibitions at Southwark Park Galleries and the Barbican Art Centre, in London; and the Whitworth Art Gallery, Manchester, and the Ikon Gallery, Birmingham. He has contributed to shows at Hayward and Saatchi galleries in London, and Hauser and Wirth in Somerset. In 2013, he represented Wales at the Venice Biennale and was shortlisted for the Artes Mundi Prize in 2016.

The galleries at East Quay are run by a charity, Contains Art CIO (charity number 1193931), which is founded on the belief that who you are, where you live and what you have, should not constrain access to creativity and culture. All donations to the Gallery and Contains Art are reinvested in art, culture and arts education.

Special thanks go to:

All the community members who featured and participated in Near Mint:

The exhibition would not have been possible without the generous support of: